First of all, you can get the KIT here! It may be out of stock, but that is a different story ;-) These 3 pictures show the output voltage of the onboard open loop step-up converter. The voltage base line for the big image is the first div separator from the bottom. The amplification is set to 10V/div. In the 2nd and third image the timebase is set to 5µs/div and 100ns/div, the amplification to 10mV/div. When testing it for the very first time it delivered 55.2V DC with only about 40mV of ripple. I haven’t checked if the ripple’s frequency ( about 250kHz ) corresponds to the driving voltage that is fed to the FET. The HF ripple has a frequency of about 15MHz and is way faster than what the ATmega168 should use to drive the boost converter. The backup battery needs a small blob of solder to get good contact with the board. Also the battery clip must be put on before the diode. Too much solder will block the battery, so don’t ;-)

Hooking up the VFD tube: If you cut the tube’s wires like this, you’ll have almost no trouble inserting it into the PCB. Aligning the VFD tube, so it fits well ( flush with the left cover ) : The assumed spare pair of nuts is used as spacers for the main PCB, so don’t repurpose them before you’re done with the KIT. The bottom cover also contains a short manual – sneaky. Some of the nuts must be hacked, so they fit perfectlly: The acrylic is very prone to finger prints, so make sure you’ve cleaned the pieces before you assemble the box!

The clock is quite easy to build, but needs some care nevertheless. Especially the vacuum fluorescence tube is easily hurt. For one thing it is made of glass. Also the wires coming out of it don’t seem to like being bent to often. The rest is simple. If you’ve built a boarduino DIY KIT or similar, you won’t have any problems with it.

All pictures of the build can be found in the flickr set. The clock’s home page with assembly instructions and firmware download is here. In case you need it and don’t want to poke around in the Makefile, the fuse and lock-bit settings for the ATmega168 chip are: lfuse: 0xE2, hfuse: 0xC6, efuse: 0x01, lock: 0x3F. Programming the chip using the ICSP connector only works after removing the VFD driver and backup battery. Otherwise the programmer can’t talk to the chip properly.

Here are some IV-18 clocks, that look quite similar to this one:

I and others have had problems with the clock resetting randomly when buttons were pressed. It turns out that this was caused by nested interrupts due to switch bouncing. Each time the ISR gets called some registers, and more importantly a return address, are pushed onto the stack until it runs out of memory and all goes bad. 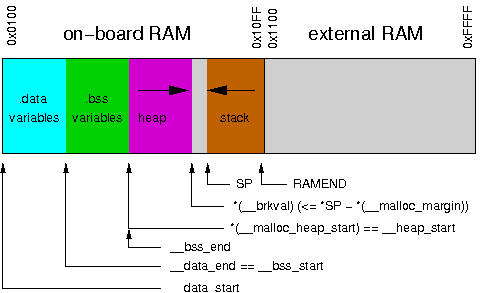 During interrupts and subroutine calls, the return address Program Counter (PC) is stored on the
Stack. The Stack is effectively allocated in the general data SRAM, and consequently the Stack
size is only limited by the total SRAM size and the usage of the SRAM…

Nesting can be avoided by disabling the interrupts inside the ISR. Now the interrupt cannot occur anymore while the handler is running. All the resets are gone !